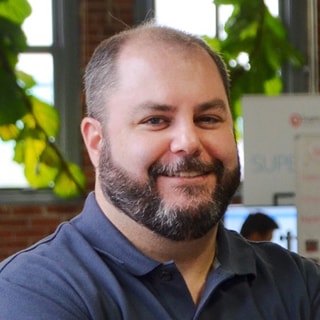 “It comes down to our employees knowing that they're valued. Pingboard helps me show my team how much they matter.”

Challenges: Figuring out a new internal structure + creating a culture of appreciation

Being successful in a new position relies partly on how quickly you can learn a lot of names, faces and who does what. The faster you learn the nitty-gritty details the easier your day-to-day becomes.

When Ben Hubbard joined Super Dispatch as their new COO, he wanted to make a strong and positive first impression on his employees. To Ben, this meant letting his employees know they were valued members of the team. “When I joined Super Dispatch, it was important to me to get to know my team quickly—who they are, how they work together, and what makes us successful as a team.”

Ben knew that meant getting on board with simple things, like celebrating birthdays and work anniversaries, as well as understanding the bigger pieces, like hierarchy and how different teams and people fit together. “As COO, your people expect that from you, starting on day one,” he explains.

Part of the challenge of Ben’s goal was that his team didn’t work in the same city. The head office is in Kansas City; there’s the engineering headquarters in Tashkent, Uzbekistan; and then there’s a handful of remote employees scattered throughout the U.S. Figuring out who reported to whom took some ingenuity on Ben’s part.

“I realized that different people within our organization had different interpretations of key reporting relationships,” Ben says. “So my office manager and I spent a few hours whiteboarding office hierarchies. It felt absurd and archaic.” Ben knew there were better ways to organize all the info he needed.

When I joined Super Dispatch, it was important to me to get to know my team quickly—who they are, how they work together, and what makes us successful as a team."

Solution: Pingboard’s interactive and easy to use app

Ben used Pingboard at a previous company and thought it was a great tool to easily visualize his company’s structure. He also knew it could help him streamline processes around organizational tasks like time off requests and hiring.

But just as importantly—Ben knew Pingboard could help him do the little things that ensured his people felt valued:

“I believe people are important. I can do my best to show that, but it can easily be undone by a simple thing like calling an employee the wrong name or not remembering somebody's birthday.”

The Super Dispatch team started using Pingboard and were delighted to find it didn’t need much manual work because it automatically updates when connected to their G-Suite account. Even better, as expected, the staff directory made it possible for Ben to quickly learn a lot about his new team.

For example, on his first trip to Uzbekistan to meet the engineering team, Ben wanted to follow the Uzbek custom of bringing a gift when he visited. Because Super Dispatch employees put their t-shirt sizes in their Pingboard profiles, Ben didn’t have to guess on sizes. “I ordered t-shirts with our logo and a catchy phrase that was written in Uzbek,” he says. “But I didn't have to order 15 extra shirts just to make sure there's enough in every size. I knew exactly how many shirts of each size to order thanks to Pingboard.”

Pingboard also helped Ben learn the names of his Uzbek team. “They have a fun mobile quiz app to help with this. It shows you a picture of somebody on your team and gives you several names. You have to guess the name of the person,” he says.

“I'm an executive. When I meet somebody, I need to know who they are and what they do. If I don’t, it doesn't boost their confidence. It doesn't strengthen their engagement. Pingboard helps me stay on top of these details.”

Pingboard has allowed Ben to make real connections, beyond just knowing who everyone reports to. He’s able to connect with his team in a more meaningful way, ultimately having stronger working relationships with them.

With Pingboard, Ben is able to keep up with his growing teams without micromanaging them. The amount of time Ben spends on organizational details has gone from hours per week to just minutes per day. Ben can jump into Pingboard and see an instant snapshot of who’s doing what that day. He no longer has to check with everyone to get these details, ultimately saving him an estimated 4 to 5 hours a month.

“I'm in Pingboard every day,” Ben says. “ It helps me stay on top of organizational details like who's in and out of the office, what meetings are taking place, and calendar invites.”

Pingboard allows employees to manage all of their information, personally. With its self-serve functionality, they can even enter personal details, like t-shirt size or favorite local restaurant. And, it gives them the ability to track when they will and won’t be in the office, without having to get anyone else involved.

Prior to Pingboard, time off requests had to go through the Director of Finance, who then had to confirm the request with a manager. Now, everything happens in Pingboard and the manual tasks have been eliminated

The Super Dispatch team embraced Pingboard, without any hesitation.

“They didn't realize the spreadsheet they used before was inefficient in many ways,” says Ben. “Once we started using Pingboard everyone saw how much easier it was compared to the old spreadsheet. They loved it. Now, no one would dream of going back at this point.”

For Ben, never missing a birthday or any other important milestone goes a long way. Pingboard gives him all the tools he needs to connect with his team. It also equips him with the insights he needs to make that connection meaningful.

“It comes down to our employees knowing that they're valued. Pingboard helps me show my team how much they matter,” Ben says.

Once we got Pingboard everyone saw how much easier it was compared to the old spreadsheet. They loved it. Now no one would dream of going back."

Super Dispatch is a complete end-to-end technology solution with powerful back office software and driver apps for Carriers, Brokers, and Shippers.